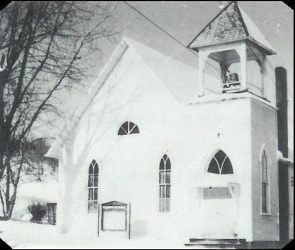 They came in their Model T’s, in buggies and carts, skinny tired bikes, and on horseback.  They trudged down dusty trails and skipped through back alleys.  It was a lazy, hazy autumn in 1926 and a soul shaking revival was “better’n nothin’”

That was the Coolidge era.  The roaring 20’s Jazz Age, Prohibition was blotted out by speakeasies and bootleggers.  Gangsters shared tabloid headings with Lindbergh, “the Lone Eagle”, and his non-stop Atlantic flight.  Babe Ruth was hitting home runs and Red Grange, Jack Dempsey, and Gene Tunney were sports heroes.  The president, even then, advocated chopping government spending and shrinking the deficit.  Women, with rolled-down hose and bobbed hair, finally won their right to vote.

Mineral City’s “day in the sun” unfortunately was fading fast.  George Leckner and Alfred Davis had checked out the lush Sandy Township spot in 1840.  Those pioneer trailblazers recognized the volume and quality of the coal and clay.  “We’ll buy us 300 acres of land, make a deal with the Cleveland and Pittsburgh Railroad.  This will make a fine mineral point!”  Davis said.  It was!  The partners laid out a 40 plot allotment and Mineral Point took root in twelve short years.  Davis’ son, W.L., was an industrious contractor and developer.  Farmers were moving to town.

In 1864, C. Edward Holden, a New York stock broker, no less, arrived on the scene.  The bearded dynamo soon had the Point trembling with stone quarries, clay and coal mines, slaughter houses, stores, and hotels.  The phenomenal growth and opportunities brought a chain of enterprising seekers.  Holden called the town “my little Chicago” and started “The Mineral Point Express”- a newspaper to tell it like it was.  Soon there was a bank, a city hall, attorneys and undertakers, barbers and blacksmiths.  The one room school grew to four classrooms plus a stage.

In 1872 the town was incorporated and recognized as a metropolis – Mineral City.  J. F. Rice served as the first mayor and Davis even built a grand opera house.  Will Rogers, with slow drawl and dry humor, was one of the many outstanding celebrities who drew the crowds.  In the summer there was always a carnival, a full season merry-go-round, and tent shows and gypsies.  The band played loud and often and the baseball team was a red hot winner year after year.  The Bloomer Girls basketball games were equally impressive.  There was even a “Sunken Garden” between the Palace Block, where the bank and business district was located on Route 800 and Center Street.

So what happened to this beautiful dream?  The country appeared to be prosperous but there was a drifting “why –worry” apathy in the young city.

Not that God was being ignored.   In 1840, even before Leckner and Davis were plotting the town, fifteen families of German-Swiss immigrants had erected a log church in the Sandy woodlands.  By 1859 the worshipers built the St. Paul’s Reformed Church on Miner Street, where it stood for a hundred years!  Today, in a fine First Street Sanctuary, it is known as St. Paul’s Community Church.

The German Lutheran’s didn’t do so well.  Their Miner Street meeting house, built in 1857, was abandoned and was transformed into a village hall and jail.  Later the fire department used the premises until they built a station in 1966.

The Methodist church, organized in 1872, erected its present brick building in 1874 and the congregation continues to praise the Lord on Davis Street!

Those of the Catholic faith originally gathered in homes to worship until a rustic chapel was built one half mile east of town by the C&P Railroad.  It had deteriorated by 1881 when St. Joseph’s Church in Dover made Mineral City a mission project.  The church on First Street beside the grade school served the parishioners until 1968 when they built a new church on Route 800 north of the village.  Today, they worship as Holy Trinity in Zoar.

The United Brethren in Christ congregation worshiped in a small room between Grant and Division Streets until they managed to build a square frame church on Center Street.  Several years later the lighthouse beam flickered out for the Brethren.

Perhaps the clay and coal were running low.  Maybe the younger generation-and those World War I veterans who had looked at far flung fields- were searching for greener pastures.  In any case, progress was grinding to a screeching halt.  “What’s new?”  was a holiness revival!

Rev. Dick and Tillie Albright, roving fire and brimstone evangelists, had plenty of help pitching their frayed, leaky tent.  Local lumbermen obligingly hauled in a couple loads of sawdust and, for a few pieces of penny candy, every kid on the block helped stretch the splintery planks on wobbly blocks.

It wasn’t a totally new adventure.  Jesus people often stopped in Mineral City but the Albrights had the old time Nazarene spirit- lusty and loud.  Kneeling in the soggy sawdust for saving grace had a special significance.  Short term, it seemed God was scoring a lot of points.  Then the tent was folded.  The fiery preachers turned their glory beam in a new direction.  Promises blew away with the sawdust.  Many converts remembered the splinters more than salvation.

Mary Oberlin, a discontented Methodist, felt the weight of the cross.  “You know, Charles,” she told her postmaster husband, “God WANTS us to start a holiness church in Mineral City!”

“Suppose you’re fixing to buy that dilapidated Brethren box up the street?”

And pray she did!  With Ferol Baldwin, who also hungered for a more personal experience with the Lord, they not only prayed but they put action behind their pleas.  Dan Lautenschlager, a former neighbor who was active in Canton’s First Church of the Nazarene, was the middle man.  He gathered friends and thirty people came to a prayer meeting at the Oberlins.  Before the evening ended there were bountiful blessings and a giant step in faith!

Those eager Christians decided to take their battered kitchen chairs to Bill Walters' bleak tin shop, south of town by the railroad tracks, "an' have us a real church..."
The only music was the train's shrill whistle, reminding them God was the engineer in charge.  Not much heat except for the warmth in their hearts.  The light of the Lord shone round about and all was well with their souls.

By assembly time in April, Rev. Albert B. Schneider, who had taken charge of the flock, reported 15 members with an average of 30 in Sunday School.  The young church was on its way!  That was the year Charles Edwards, the new pastor, negotiated with United Brethren in Christ whose Center Street congregation had disappeared.  They paid $25 down and moved into the Center Street church.

The crumbling cathedral wasn't the greatest, as chapels go.  Water-spotted, tattered wallpaper drooped from the grooved ceiling.  The bare pointed windows seemed symbolic but there were plenty of splinters when worshipers kneeled by the rough wooden altar.  Four iron piped gas lights made it possible to see the words in the ragged donated hymnals when someone could be found to pump the ancient organ and the ornate piano.  The bell had a good clear ring.  People came!

Wall Street’s Black Thursday in 1929 brought the fateful Depression with hunger and pain.  Now there was plenty of time to remodel the church, but no money!  Inch by inch, year by year, the struggle continued.  On October 5th, 1936 (after paying a total of $2800) the deed was surrendered.  Still to come was a procession of mind boggling repairs, improvements, and renovations.

Today the Church stands a beautiful building.  Through the years many improvements have been made, featuring a large foyer and new offices, a beautiful sanctuary including padded pews, a vibrant nursery, kitchen, large fellowship hall, and many rooms for Sunday School Classes, Kids Konnection, 4-H, boy scouts, and other community groups to use.  In 1998, the Church purchased the current parsonage located to the left of the church, turning the former parsonage into the Church Annex, which now contains a 5 room teen center, as well as rooms for guests to stay in.  The church later purchased property located behind the church and created overflow parking, as well as land for the Church Campus to extend as more room was needed.  In 2016, the church family took a large step of faith and pledged to renovate the sanctuary and lobby.  Within weeks, God answered that step of faith and all money needed for the project was pledged.  Construction was completed in October 2016 with a rededication of the Sanctuary on the church's 90th anniversary.

So many people struggled so earnestly, through trials and tribulations, wars and worries, death and desolation.  Not only for a beautiful church, but laboring for the Master and glorifying His precious name.  Not a slim sheet of paper, but a whole set of encyclopedias would be required to list all the stars who generously have given, and still give their time and talents for the glory of God and the Mineral City Church of the Nazarene.

May the next 90 years find His church “Watching and waiting, looking above- Filled with His goodness, lost in His love…”